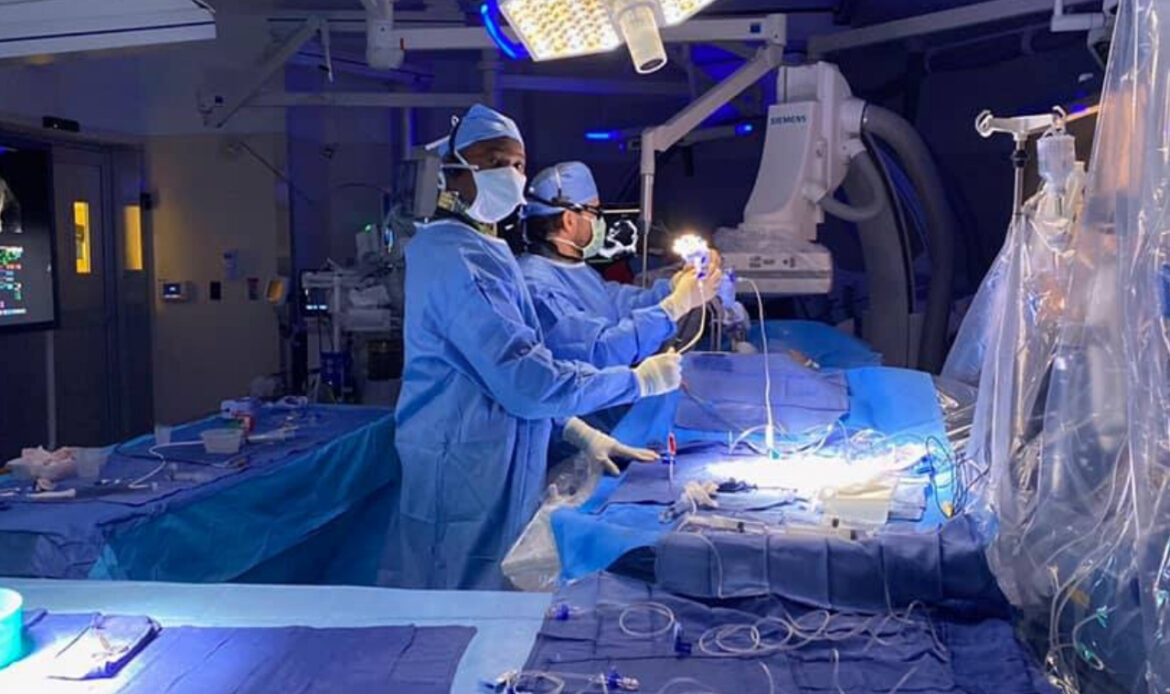 Being in the medical field, being exposed to potential patients who have COVID-19, you know, it’s imperative for me that my life is built on the foundation of God’s word.

The Bible says in Matthew chapter seven 24 through 29. It talks about building your life either on the foundation of a rock or building your foundation on the sand. It said the storm came to both of those types of people. And you know, so, I mean, basically, it’s just saying that the storms are going to hit all of our life. Like, guess what? None of us are exempt from storms coming in our life, but how do we handle the storm? What is our life built upon? You know? And the fact that you spoke the word just shows and that’s what I’ve been doing. I’ve just been speaking God’s word because the Bible says that God watches over his word to perform it.

“Those who live in the shelter of the Most High will find rest in the shadow of the Almighty.” Psalm 91:1 (NLT)

In other words, I know that it’s a world system and I’m going to have what I say. So, I’m saying the same thing. I’m saying, “no, I’m not going to catch Corona because you know, I am kept in safe to wherever I go.” The Bible says in Psalms 91 that “if I dwell in the secret place of God and I abide under the shadow of the almighty, that that he’s my refuge.” He’s going to protect me. So, I believe with all my heart, I have the divine protection of God, no matter what’s going on out there, no matter what’s happening, and I want you to understand the same thing for you. You have divine protection from God. You know, God said something to me today. I heard something today, triple A. And it just blessed me so much. You know, one of my favorite preachers was preaching and he said, triple A.

And he said that’s angels. He said that’s the anointing. And he said that’s authority. And you just talked about that. You talked about authority; we have authority. So, if we will begin to use our authority to say that “no evil befall thee, neither shall any plague come nigh thy dwelling.” According to Psalms 91:10, we exercise the authority of God. We know that we have the protection of the angelic host because we are believers in Christ Jesus. In addition to that, we have the anointing of God and the anointing, the presence of God is on us, you know, we’ll keep us and drive away Corona or anything else. So it’s been imperative to speak that, particularly while I’m at the hospital, while I’m working on patients who may potentially be infected with the Coronavirus or even coworkers because we’ve had coworkers, we’ve had nurses and other physicians that have come down with this virus. And so, it can be a fearful time. And that’s what the enemy tries to do grip people with fear because he knows if he can get you into fear. Job 3:25 says it best. “The thing that you fear the most will come upon me.”

So that’s, been it for me, just standing on the word, speaking God’s word, having my faith, and trusting God. Yes, using PPE “personal protection equipment”, but more than that, because that’s limited, but God’s not limited. And my faith in him will always take me further and provide more protection than any PPE equipment could ever possibly do. “So how do you have peace during Corona?” How do you have peace during Corona? You know, again, I think that the only way that you can have peace during Corona, the only way is that you have to have like total faith and trust in God that’s it. And the Bible says that God will give us peace that surpasses all understanding, and that’s, you know, it’s just imperative that we feed our faith. You said something about how people just go on and watch hour after hour, they watch hours of the news.

The news. Even on Twitter. I love Twitter. Some of the things people are saying, I was like, man I just need to log off. Because man, these people, they just, I don’t need this. I said, these people, they know as much as the next person, which is nothing. And they’re out here trying to feed fear into everybody else, what is this accomplishing right now?

Yeah, that is, exactly right. Because you know, the deal is, you know without faith, it’s impossible to please God, but without fear, it’s impossible to please the devil. If the way we receive from God as followers of Christ, you know, believers in Christ, Jesus, the way we receive from God is by faith. Like we have to have faith to receive anything from God. The Bible literally says in Hebrews 11:6 that “without faith, it’s impossible to please God.” So if we’re going to please God, if we’re going to receive anything from God, we have to receive it by faith, but the enemy also Satan, the devil, the dragon, what he’s called, he knows that the only way that people can receive from him is through fear. So, what has he done? He’s released fear throughout the land, throughout the nations of the world. And notice what second Timothy 1:7 says, “God’s not given us a spirit of fear, but power love and a sound mind,” that’s it.

So, Satan’s released his fear and the way people if people look at stuff, whatever you feed grows and whatever you starve dies. I’ll say that again, whatever you feed grows and whatever you starve dies. So, if you are sitting hour after hour watching hour after hour of the death toll and the death count and how many people are dying and how many people get infected, you know. This county is affected. This county and this shutdown and this shop I shut down. And oh, if you sneeze, the sneeze only goes, they use to say six feet. You know? So, the six feet social distances now they’re saying, oh no, it goes up to 27 feet. So no, you shouldn’t wear a mask. You shouldn’t wear a mask, now you should wear a mask. I mean, it’s literally changing every day, and I understand that new information is coming out because this is new. They don’t know so much about it, but I, you know above all of that, I’ll say the only sure thing, the only thing that you can base your foundation upon for your protection for you and your family and people that you care about your coworkers, your loved one, and the world is that we have to put our faith and our trust in God, above all else.

That’s real. That really is real. And I just want to ask some more things. I encourage you guys that during this tough time, like listen to some encouraging music. I listen to Kanye Sunday Service all the time to get my spirits, right. Hillsong is another great group. The Belonging Co is another great group. Elevation Worship has a lot of great music and stuff that listen to. Todd Dulaney. And listen to some teaching to help build your spirit during these tough times, like rather it be mine or even my dad. My dad has a YouTube channel himself and we’ll link it in the bio. So, you guys can just kind of feed your faith right now and starve your fears. And some of my other favorite pastors are to listen to are Rich Wilkerson, Apostle Guillermo Maldonado. Also, Dr. Rainey. Pastor Steven Furtick is probably my all-time favorite pastor right now. Bill Winston, just listening to stuff like that. And I encourage you guys to read Psalms 91 a couple times a week. Even myself, I was doing that this week just to re-study it. Because it’s one thing to know it in your head, but it’s another to know it in your heart. So, I was like, man, if I know this in my heart, but I know I will be fine.

And I just want to of course right here, if there’s anyone who has never known Jesus Christ as Lord and savior, I never want to close this broadcast for an opportunity to lead you to him. So, I want you guys to repeat after me and say, Lord Jesus. Lord Jesus. I repent of my sins. I repent of my sins. I know that you are the only true and living God. I know that you are the only true and the living God. Thank you, that I am forgiven for everything I have done in the past. Thank you, Lord, for forgiving me for everything I’ve done in the past. And I thank you that you are now my Lord and Savior. And I thank you now, Lord, that you are now my Lord and Savior. In Jesus’ name. Amen. In Jesus’ name. Amen. If you prayed that prayer just reach out to me in the comments, man, that’s one of the best decisions you ever made. So, I want to thank you guys for taking time out to watching my video. And I’m going to keep all of you guys in my prayers. Cause I know this thing has people really, really scared right now, but I just want to tell you guys just to believe God is for you and not against you. And you’re going to make it through. You’re going to make it to the other side. And you’re going to, testify, how you didn’t know you were going to make it through, your bank account said one amount, but God blessed you. And you were able to make it through and you were blessed to be a blessing to somebody else.

Any cookies that may not be particularly necessary for the website to function and is used specifically to collect user personal data via analytics, ads, other embedded contents are termed as non-necessary cookies. It is mandatory to procure user consent prior to running these cookies on your website.